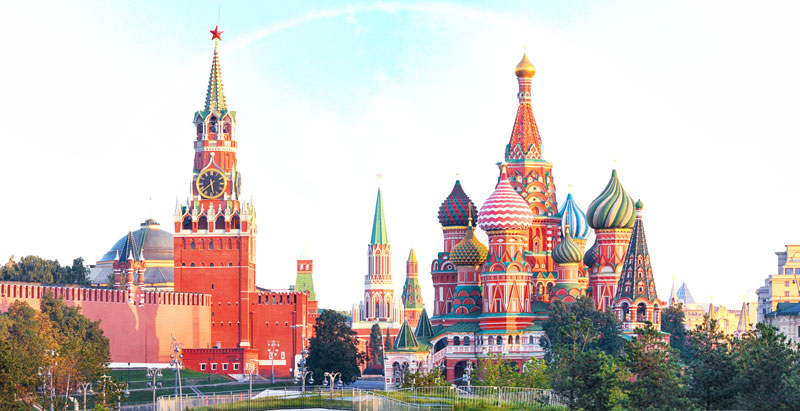 Moscow is the capital and the most heavily populated city in Russia. Considered the largest city on the European Continent, it is an iconic and global city and a key political, economic, cultural and scientific center of not only Russia but of Eastern Europe as well.

Moscow is a city renowned for the Red Square, the Kremlin-the largest medieval fortress and St. Basil’s cathedral, and also the 3rd busiest metro line in the world. Moscow has one of the world’s largest university building- Moscow State University which was founded by Prince Yuri Dolgoruki in 1147. The university is located by the Moskva River in the Moskva Oblast in the European part of Russia.

With over 40 percent of its territory covered by greenery, Moscow is one of the greenest capitals and major cities in Europe and the world, having the largest forest in an urban area within its borders.

It is worth mentioning that Moscow is home to 63 stadiums and has hosted the 2018 FIFA World Cup.

Currency: The Russian Ruble or Rouble

Business Hours: Government offices, open from 9am or 10am to 5pm or 6pm weekdays. Banks usually open from 9am to noon Monday to Friday; those in major cities often also open from 1pm to 6pm. Currency exchange booths open long hours, and on Saturday and sometimes Sunday too.

Most shops are open Monday to Saturday. Food shops tend to open from 8am to 8pm, except for a break from 1pm to 2pm or 2pm to 3pm; some close later, some open Sunday until 5pm. Other shops mostly oper­ate from 10am or 11am to 7pm or 8pm, with a 2pm to 3pm break. Department stores may run from 8am to 8pm or 9pm without a break. A few shops stay open through the weekend and close on Monday.

Even on the smallest streets, you can find a place that gives you the opportunity to buy either a small souvenir to remind you forever of your Moscow experience, or anything else that you need and want. Arbat Street is a must visit for souvenir shopping, and you can also enjoy shopping at some of Moscow’s famous shopping malls such as, GUM, TSUM, Petrovsky Passage, European Mall.